The Executive Negotiating Committee met face to face with American Airlines this week in Washington D.C.

Complete Tentative Agreements were reached on:

As previously reported in our last session, Association negotiators presented the company with a comprehensive proposal on Scope for all groups.

The Scope proposals set the foundation for the Association this week to present to American Airlines, the largest and most profitable airline in the world (who yesterday reported year-end profits of $3.8 Billion), proposals on all outstanding economic topics. Those topics include Healthcare, Retirement and all forms of Compensation.

Your negotiating committees are pleased to have all of these topics on the bargaining table, a necessary next step in the completion of JCBA negotiations and returning to our members what we have sacrificed to put the company in the position it is in today.

Your continued solidarity and support are critical to our success at this juncture of the negotiation process.

As a follow up to the note I sent you related to the direct deposit issue for 133 team members’ $1,000 tax reform-related payout, I’d like to update you on our investigation and steps we’re taking.

Based on our current investigation, it appears that an unauthorized person was able to reset a small number of team member Jetnet passwords to gain access to certain team member ePays account information through Jetnet with the purpose of redirecting payroll direct deposits to a fraudulent bank account number. The reason these 133 team members received a paper check for the $1,000 payout was to ensure the unauthorized individual was not successful in redirecting funds.

What information was impacted?

American has found no evidence of access to any personally identifiable information such as social security numbers, passport numbers or credit card numbers. Although these team members’ names, bank account numbers and routing numbers were visible, American does not store bank account passwords, security or access codes to their bank accounts. As such, we do not believe this incident could result in any unauthorized access to impacted team member bank accounts.

Within twenty four hours of learning of this activity, American took a number of steps to protect its team members:

As I mentioned above, we’ll continue to share pertinent updates with you and your affected members. If you have any questions, please let me know.

The union has been honoring our founder with these scholarships since 1969. Quill Scholarship awards have benefitted hundreds of TWU families. Sons and daughters of our members in transit, railroad and air transportation, utilities, public employment, space installations, and allied industries are among those who began their college educations with the help of TWU’s signature scholarship.

State of the Union 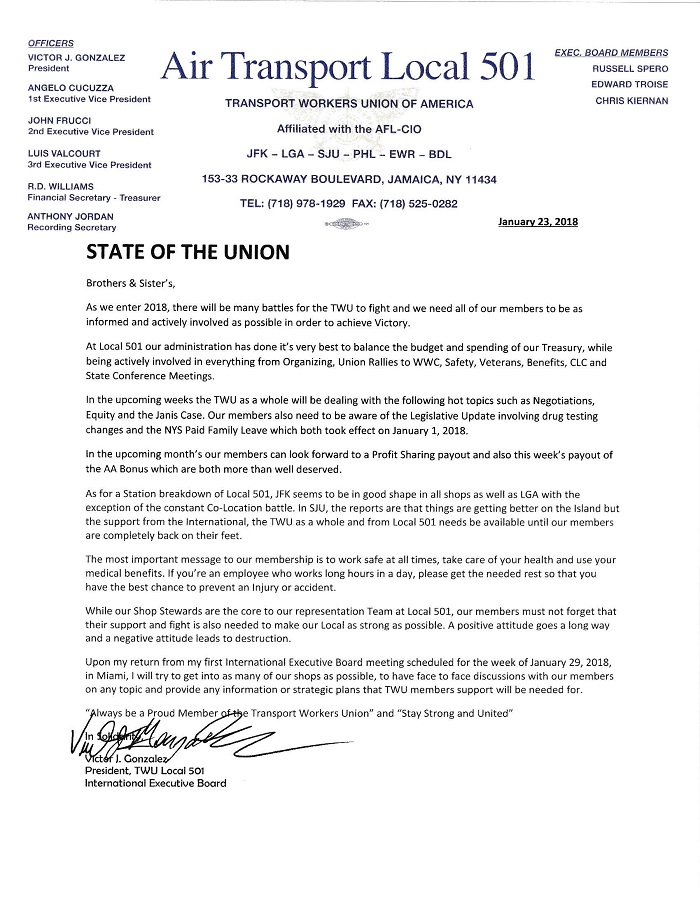