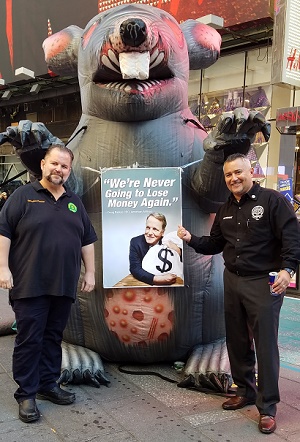 TWU International President John Samuelsen joined four hundred TWU members from 17 different locals, as well as our brothers and sisters from other unions like APA and CWA, in Times Square to rally for an industry-best contract at American Airlines. 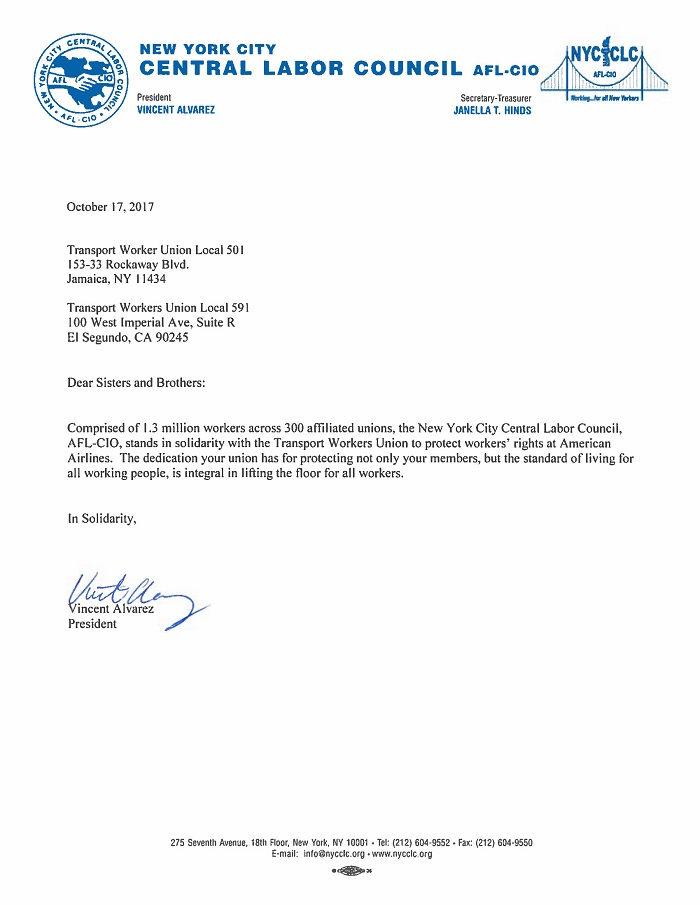 On Wednesday, TWU locals representing Aircraft Maintenance, Fleet Service, Facilities/Ground Support and Stores members at the world’s largest airline will picket American Airlines at 42nd and Broadway in New York. The demonstration will welcome TWU leadership, officers, and members of labor organizations from around the country, including APA, APFA, CWA, IBT, and IAM. Their primary message is to shed light on American’s latest plan to outsource many more U.S. based jobs overseas and to outside vendors. The demonstration will also call on the company to start bargaining in good faith and to deliver on the “industry’s best contract” its executives have been promising for nearly two years.


At the heart of these negotiations lies the safety of the traveling public and our flight crews, as American Airlines continues to move forward with its plan to investing approximately $100 million into building a new aircraft maintenance facility in Brazil; we are fighting back for American workers, not American Airlines maintenance hangars staffed with foreign workers.  To make matters worse, this facility staffed with foreign workers will include many not certified by the FAA and none subject to the same FAA drug and alcohol testing as the airlines US based workers.  American also continues to support outsourcing to other foreign aircraft maintenance facilities throughout the world, including Argentina and Chile, where employees do not meet the same rigorous FAA standards; as American’s US based employees.


Sadly, while American Airlines CEO Doug Parker complains about unfair competition from foreign airlines flying in the United States, he is lobbying for his own company to offshore a massive amount if American Airlines aircraft maintenance and aircraft inspections to the lowest foreign bidder.


American has also outsourced a substantial portion of its FAA mandated security inspections and aircraft cleaning to third party contractors, many only pay their employees minimum wage. This results in a high employee turnover and a lack of experience, which may also compromise aircraft safety and security. Further American Airlines has proposed the elimination of deicing work by American Airlines employees, in an effort to further reduce cost; we see this as an unwarranted risk to flight crew and passenger safety.


After 9/11, American Airlines asked TWU to tighten their belts to help the airline financially, in order to keep the company afloat – and they did. In 2012, management took American into bankruptcy with nearly $4 billion in the bank, forcing more concessions onto the very workforce that saved them.  Today, as the airline makes billions per quarter and the executives continue to reward themselves in compensation and bonuses, TWU members have seen very little. American Airlines is making profits like never before, but the way the company treats it workers, and the attention to detail and quality for the traveling public remains abysmal.  Now, TWU members at American are standing united to tell CEO Doug Parker that it’s industry best, and nothing less.

What: Picket of American Airlines to protest outsourcing and contract negotiation delays

Fact sheets and interviews will be made available to members of the media. Please visit www.twu.org/readytofight for additional information.