The Joint Association Mechanic & Related/Stores and Fleet Negotiating Committees met with American Airlines this week in Dallas. Updates from both committees are below.

The following negotiation dates have been scheduled for the remainder of the year:

During this week’s session, the following articles were exchanged and discussed:

There has been no exchange of proposals regarding Recognition and Scope, Medical Benefits, Retirement Benefits, Seniority, Transfers/Vacancies, Classifications, and new Compensation Rates.

During this week’s session, the committee exchanged and discussed the following articles:

The company met with the union this week to share their draft plan on implementing Cross Utilization in Line Maintenance. The union will review the plan to make certain it is in accordance with the Interim Letter of Agreement. 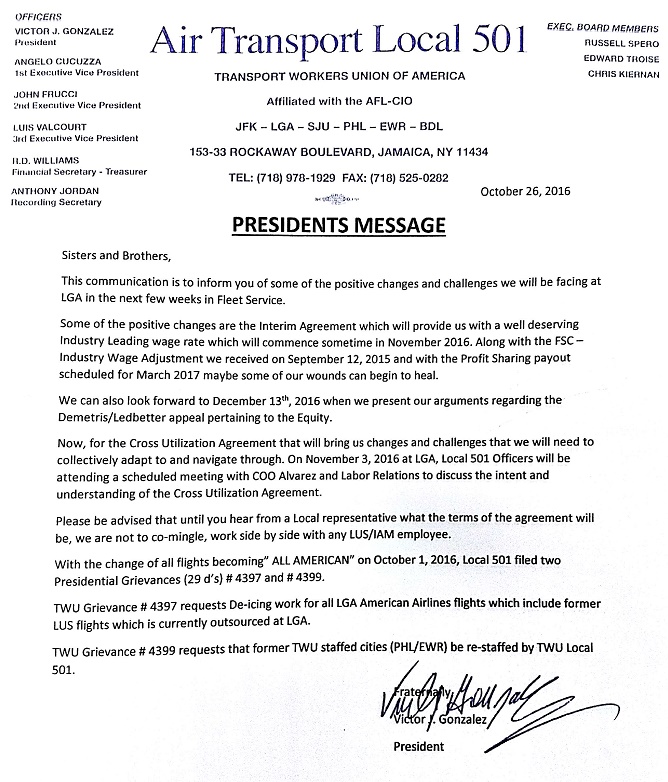 The Joint Association Mechanic & Related/Stores and Fleet Negotiating Committees met with American Airlines this week. Updates from both committees are below.

Sisters and Brothers,
The Association Mechanic & Related/Stores Negotiating Committee met with American Airlines during the week of October 17th in ORD.  During this week’s session, the committee exchanged and discussed the following articles:
Hours of Service – M&R & MLS – We continue to work on this article and are moving closer to an agreement.
Ten-hour shifts – The company responded to our proposal for implementing and eliminating ten-hour shifts, and we are waiting on them to clarify one aspect of their response.
Realignment – The company passed us a response to our last proposal and we are close to a tentative agreement on this portion of the Article (Hours of Service).
Reduction in Force – M&R & MLS – We exchanged proposals on this article and have made some significant progress.
Recall – M&R & MLS – We prepared our initial proposal on this article and are planning to pass it on Monday.
Overtime – M&R – We did not exchange or discuss this article in this session. We remain steadfast in our positions on NO mandatory overtime, limiting job continuation and pay for overtime bypass.
We are also working through the overtime distribution procedures, particularly how the overtime will be called.
Vacation – M&R & MLS – We are still waiting on the company to respond to our proposal.
Vacation – MCT – We have not received a counter proposal from the company on this article.
Holidays – M&R, MLS, MTS and MCT – We have narrowed this article down to holiday payment. We did not receive a proposal from the company this week.
Limited Duty – M&R, MLS, MTS and MCT – We did not exchange or discuss this article in this session.
Current TAs:
Fleet Service:
Sisters and Brothers,
The Fleet Service Committee met with American Airlines this week in Chicago.  After much discussion regarding cross utilization in the early part of the week, we made sufficient progress to engage in other areas of our negotiations.
In the meantime, the company has committed to meet with local leaders of the Association to discuss the specifics of cross utilization prior to implementation at a co-located city. We are asking the membership to be diligent in reporting any attempt of co-mingling to your respective union representative, and would like to thank our brothers on the M&R Association Committee for standing shoulder to shoulder in solidarity with us over the cross utilization issue.
In addition to cross utilization issue, the company passed the limited duty article to the committee, and extensive deliberations followed. We will not be accepting the company’s proposal because it disadvantages the members injured while performing duties on the job (IOD/OJI). We continued to exchange multiple existing proposals and spent considerable time discussing these articles.
This week we did reach a tentative agreement with the company on the language regarding temporary assignments, but it is undetermined at this time if this language will be a stand-alone article or incorporated into another article in the final JCBA.
The company has not responded to our last proposals on holidays and sick leave, and the outstanding issues include the number of holidays, the rate of pay, number of annual sick days accrued, and the cumulative maximum sick leave bank.
The following negotiation dates have been scheduled for the remainder of the year:
Fraternally,

The fifteen-minutes allowed for each side to present arguments regarding the Demetris/Ledbetter appeal has now been scheduled for Tuesday, December 13, 2016 at 9:30 am in San Francisco before the 9th Circuit Court of Appeals.

We will not be informed of which Judges will be sitting on the panel to hear the arguments until December 2, 2016.

As additional information is received, it will be forwarded accordingly.